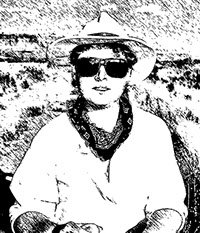 My Life in Ruins

​Ruins at Chaco Canyon, NM, photographed in 1990 by Michael Mouchette and by my father, Robert Gabriel, for my book, Roads to Center Place.

For as long as I can remember, I've held a fascination for the origin of the human spirit and an urge to document it. It all started with my father, an accountant whose clients included governors and reservations. Traveling to remote areas of New Mexico and Arizona was required for the job, so he created a photographic study of the landscape along the lonely highways. Summers and weekends he loaded us into our family station wagon or van to visit Puebloan and Spanish mission ruins.

The creative nature of some of my teachers furthered the cause. An antique web press stood in the corner of my seventh-grade English grammar classroom, beckoning me in the way color and brushes attract an artist. The teacher, Mr. Holmes, had us create our own language so we'd better understand how tedious things like nouns and verbs linked together to form sentences. For weeks we roamed the campus and filled spiral notebooks with nonsensical words for the objects we found. Jump forward to Mrs. Walden's senior high school anthropology class during which we buried the artifacts and linguistic symbols of a culture we invented for another class to dig up and decipher, while we decoded theirs. All of these activities fermented as compost for fiction writing later in life. 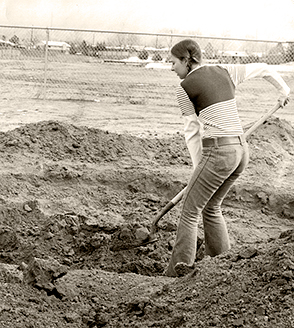 The author participating in a mock high school archaeological dig.

My training as a journalist began in high school with Miss Boughton who, despite plying us with hot chocolate, donuts, and indoor smoking privileges, had a bit of a temper when we didn't strictly adhere to the AP style of writing for our yearbook and monthly newspaper. A woman twice my size, she often "bloodied" my copy with her mechanical pencil while I was forced to watch. Later I worked brief stints in various publications, a local television news show, and a radio station while attending the University of New Mexico (UNM). Eager to find a job in my field when I graduated from "J School," I worked as the agriculture and energy editor for the Guymon Daily Herald in the Oklahoma Panhandle – of all places. Holding subsequent communications positions in various non-profit agencies, including UNM's Public Affairs Department, afforded the opportunity to delve more deeply into all forms of media and hone my writing skills.

In 1990 I began writing non-fiction books full time, most of which involved anthropology, history, and spirituality in one form or another. In 2002, after publishing five non-fiction books and ghostwriting four more, and upon growing increasingly frustrated with the struggling and competitive book industry, I turned to the lucrative sideline of wedding photography. Inevitably, I published a book on wedding destinations in 2006. (How could I not?)

Weddings aside, the writing must be fueled by subjects that are vitally intriguing to me, by questions that require composing an entire book to discover the answers. One such burning subject is humankind's evolving concept of spirituality. For instance, why did the thousand-year-old Puebloan Ancestors (formerly the Anasazi) at Chaco Canyon build their monumental housing as a tribute to the sun and moon cycles? Why did cultures around the globe, separated by oceans and centuries of existence, develop gambling to worship or re-enact their idea of creation? These questions were worked out through my Chaco Canyon trilogy, Roads to Center Place, Marietta Wetherill, and Gambler Way.

Another subject that interested me was the first century of Christianity. In my first novel, The Logos of Soul, I looked at how Jesus, as transcribed in the four gospels, pointed to a secret, inward teaching for his disciples and a more public version for the masses. In researching what that secret teaching might have been, I dug into the concept of the Word, or the Logos, mentioned at the beginning of the Gospel of John and found that it was rooted in Greek, Jewish, and Vedic writings. My second novel, A Day in Eternity, which is partially about the World War II poet, John Gillespie Magee, Jr., dives into the concepts of karma and reincarnation.

A wise woman once told me that historical research develops the mind, but such knowledge does not evolve the soul. History has to have meaning to the reader's present moment. It is my hope that my books begin to fulfill that matrix.

Further reading on A Day in Eternity

Further reading on The Logos of Soul