A day in eternity 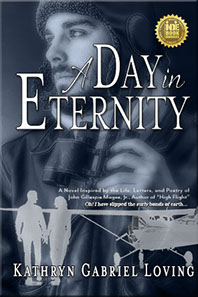 More about John Magee and "High Flight" below on this page.

Further reading on my blog:

Inspired by the Life, Letters, and Poetry of  John Gillespie Magee, Jr., Author of “High Flight”

British pilot Anson Roe will ignore borders and strain relationships to achieve a career in Ag-aviation. He is the type of individual who would capture a rattlesnake with his bare hands just because he is curious. When he dreams of crashing his airplane in a remote corner of the world, all he can think of is the whereabouts of his girlfriend, Vivianne. He awakens at a small airstrip in “No Man's Land” Oklahoma, a year backward in time, suffering from apparent heatstroke and random amnesia. Brought to his knees, he is rescued by World War II Spitfire pilot and poet, John Gillespie Magee, Jr., author of the famous sonnet, “High Flight.” John Magee treats Anson to the force of his intellect, to tales of his barnstorming feats, and to his insight into life, death, and the laws of physics. In a story that interweaves the romance of aviation with mysticism, the two pilots discover their parallel lives and unrequited loves. 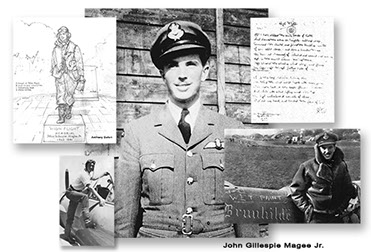 In real life, John Magree died in a Spitfire accident during WWII, three months after composing "High Flight." To this day, nearly 80 years after his death, Magee's sonnet still speaks to aviators and is nearly always read at the memorial services of fallen heroes. The character Anson Roe is also based on a real-life figure, and in the novel he benefits from Magee's experience and insights. Magee approached his life as if he would not live past his twenties because of the impending war. "I learned that a close mate of mine had died in a car collision with a tree. None of our friends had any regrets because we knew that a spirit as irrepressible as his could not be quenched. Metal and wood are purely relative and cannot extinguish the absolute of the spirit. I knew that somewhere beyond time and space—or within them—the wooded hills resounded to his laughter and singing. I knew that I would someday be there to join the chorus.” This insight into death informed his poetry and choices, and it provides the wisdom to aid Roe in navigating his own life and death decisions.

"A Day in Eternity explores the mysterious aftermath of an accident, raising questions about the very nature of temporal and physical reality. Loving creates an effectively surreal story that maintains clarity and forward momentum. She weaves a lyrical psychological puzzle through flashbacks to the protagonist’s former life and tenuous present. Anson Roe’s predicament is a decidedly unique one, and Loving explores his fractured psychological state with power and grace. She crafts both primary and secondary characters from the inside-out, creating subtly impactful interactions while maintaining intrigue." — BookLife

"As Anson Roe regains his memory, he makes a shocking discovery. What the discovery is and how he deals with it forms the most interesting part of the plot. This twist came at a point when I least expected it and changed my entire impression about the book. While the author had given a few clues in the previous chapters, the revelation surprised me and made the plot more interesting for me. ...The philosophical element added significantly to the plot, while also making the book inspiring." — Reviewer, Onlinebook Club

"Kathryn Gabriel Loving blends fiction with reality in A Day in Eternity and includes real people in her fictional plot. The narrative provides the reader with ample room for thought; there are many poignant and reflective lines to consider and ponder. The poetry of Elinor Lyon and John Gillespie Magee, Jr., is magically woven into the story.  ...The transcendence of time and place, and the building of the characters as they grow, ascend, and fly through the rising action is stimulating." — Readers' Favorite

Magee was born in Shanghai in 1922 and raised in his mother’s England where he received a classical education at Rugby School. The onset of the war between England and Germany in September 1939 marooned Magee in his father's America during a visit. Homesick and lovesick for a woman called Elinor Lyon, he grew desperate to return to England. After graduating from a prep school in Connecticut, he gave up a scholarship to Yale to join the Royal Canadian Air Force during the Battle of Britain as a long-about ticket home. After nine months of aviation schooling, he finally returned to British soil and began training on the Supermarine Spitfire.

So enraptured by the heights and speed the Spit afforded him, he wrote his famous sonnet, "High Flight," as a mere eleven-day veteran on the aircraft. It was September, 1941. He died in an unfortunate accident three months later at only 19, but his sonnet still outlives him.

Oh! I have slipped the surly bonds of Earth

And danced the skies on laughter-silvered wings;

of sun-split clouds, — and done a hundred things

You have not dreamed of – wheeled and soared and swung

High in the sunlit silence. Hov’ring there,

I’ve chased the shouting wind along, and flung

My eager craft through footless halls of air....

Up, up the long, delirious, burning blue

Where never lark, or even eagle flew —

And, while with silent, lifting mind I've trod

The high untrespassed sanctity of space,

– Put out my hand, and touched the face of God.

In the 1970s and 1980s, as local television stations signed off the air across the country, we watched a USAF jet streak and loop across the sky with William Conrad reciting Magee's "High Flight." The scratchy film is no match to what can be produced today, but back then it fired the imagination, or at least it fired mine. Chapter One of A Day in Eternity mentions this particular version above featuring the USAF T-38 Talon posted by MileHiGuy51.

In 2018, the Isle of Man Post Office in the UK issued a set of postage stamps with "High Flight" laser printed in the background in Morse code. The commemorative stamps featured iconic WWII aircraft in honor of the RAF's centennial. John Magee's Spitfire call sign and engine number are included on the final stamp. 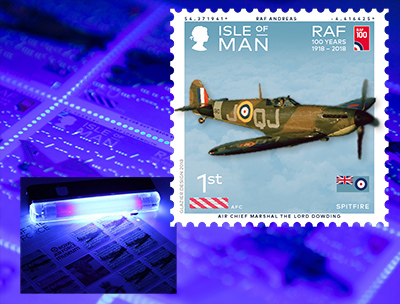 Further reading on A Day in Eternity

Further reading on The Logos of Soul